If you have done any browsing of the internet in recent months/years, you have probably stumbled upon videos and articles discussing Life Insurance. Specifically the benefits of Term Insurance vs. Permanent Life Insurance. The scenario goes something like this:

Imagine two friends Bob and Doug. Bob and Doug are both 40 years old and are looking into purchasing life insurance as a way to pay off debt if something happens to them. Doug is really excited about the permanent life insurance policy he just bought. Although he realizes he is paying 10x more than his friend Bob, he likes the fact that his policy is permanent and down the road, if he doesn’t need it anymore he will be able to get what he put in back plus some profit. 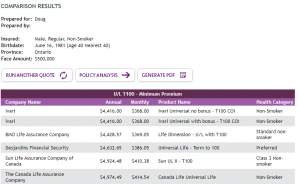 Bob is also happy with his insurance choice. “Why pay more when I don’t have to?” Bob thinks to himself. 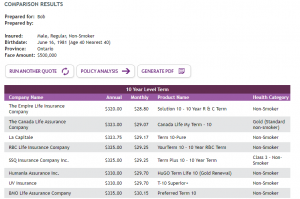 After they have painted this scenario out, they will say.  Although it may appear that Doug has the better deal ( he gets back money at the end of his policy plus some returns) then Bob (he gets nothing, if he doesn’t die that’s money down the drain), if bob were to invest the difference in their premiums over a 20 year period, assuming a return of 7% per year, Bob would end up ahead ($178,969 vs. $122,316).

While I don’t necessarily disagree with the math, I do disagree with an all else equal scenario they often use to make this point. What the scenario above does is suggest that if all else were created equal and Bob invested the difference in his premium he would end up ahead. The problem with this way of thinking is that it is rare all things are ever created equal.

Firstly, Bob may not be able to invest the difference which is why he chose the cheaper insurance option. Generally speaking most people choose insurance based on their ability to afford the premiums.

Secondly, Bob may not be disciplined enough to invest the difference anyway. If Bob really did have the ability to afford $380 per month would he save the extra $340 per month in an investment. Unlikely, he would likely pay the minimum premium maybe save an additional $100 per month and spend the rest (the way most people do).

The reality is, many of the scenarios you see in regards to Life Insurance or any other type of investment use “all else created equal” scenarios to make it seem like one is clearly better then the other and should be a no brainer. However, everybody is different and what may be a great idea for someone could lead to a financial disaster for another. The best thing to do is to speak with a professional (obviously I mean me) and work out the different scenarios and it never hurts to get a second opinion (especially if it agrees with my opinion).

The information contained herein is for Manitoba, Ontario, Alberta, BC and Saskatchewan residents only and does not constitute an offer to sell or solicit sales in any other Canadian or Foreign Jurisdictions. Mutual Funds are available through Global Maxfin Investments Inc. Insurance Products, Segregated Funds, HISA and GIC available through PPI Inc Financial Planning Service available through Jesse Reitberger This publication contains opinions of the writer and may not reflect opinions of Global Maxfin Investments Inc. The information contained herein was obtained from sources believed to reliable, but no representation, or warranty, express or implied, is made by the writer or Global Maxfin Investments Inc. or any other person as to its accuracy, completeness or correctness. This publication is not an offer to sell or a solicitation of an offer to buy any of the securities. The securities discussed in this publication may not be eligible for sale in some jurisdictions. If you are not a Canadian resident, this report should not have been delivered to you. This publication is not meant to provide legal or account advice. As each situation is different you should consult your own professional advisors for advice based on your specific circumstances.

5 Tips for When Investments Go Down.

Why is our advice simple?
Scroll to top